Womenlines takes pleasure to welcome Dr Nalini Tandon as ‘Guest Contributor’ at Womenlines. Her incredible working experience in medical field gave her an opportunity to see life very closely and she looks forward to sharing her learnings, experiences, tips, stories with Womenlines’ readers. Her first sharing is an eye- opener for young families which highlights the urgency of changing eating habits for the whole family in present times-

I was numbed with grief today! I received a telephone call informing me that Sanjay, the son of
our dear friend and neighbour, had passed away due to sudden heart failure. His problem? He was a diabetic, very obese, and only 27 years old. His death has set me thinking about the behavioural and nutritional practices of the Indian community, specifically many in the middle class.
Take the example of Sanjay’s parents. His father is a software engineer with a degree from the
prestigious IIT, Mumbai. He works in a multinational firm. Sanjay’s mother is a lecturer in one of the colleges associated with Delhi University. In other words, they are a typical middle-class family in urban India, with extremely comfortable earnings. They have two children, a daughter who is a doctor and married, and Sanjay who was their second child. The parents pampered the children, especially their son. The children were given the latest gadgets and watched TV whenever they liked; their recreations were online games and games in the malls. Every event was celebrated with a party at McDonalds or Pizza Hut since those fast food restaurants were considered prestigious. Both the parents were working and advancing their career, so they had very little time to cook or eat together as a family. In short, the family did everything wrong when it came to nutrition.
When Sanjay was diagnosed with diabetes four years ago, they were troubled, but despite the
doctor’s advice and some efforts made there was little change in his weight. A young life was thus snuffed out due to obesity and its complications!
The World Health Organization has recognized the importance of the obesity epidemic. India is
just emerging as an obesity hub, and instead of procrastinating we should act fast to curb the problem before it grows to gigantic proportions. Research reveals that the number of overweight children in India ranges from 10% to 30 %, while obese children are in the range of 5%-7%, varying from state to state. Considering the population of India, these numbers range from 12- 40 million overweight children, and 2-2.5 million obese children! These are big numbers, and while we also grapple with the problem of under-nutrition and underweight children, we cannot ignore obesity, which is spreading its tentacles to debilitate our children or snatch them away from us.
Studies have indicated that numbers of overweight and obese children are higher in more affluent states like Punjab, Kerala, and Delhi. Low levels of physical activity, television, and junk food are associated with a higher prevalence of overweight children. Obese children often grow up to become obese adults. Obesity leads to many chronic diseases like diabetes, hypertension, heart disease, sleep apnea, and teeth and gum problems. Such children are often teased and bullied. This could lead to low self-esteem, depression, and other psychological problems. This causes more isolation for the child. Being overweight can also cause breathing problems. Finding it difficult to breathe causes the child to shun exercising, leading to a vicious circle. Research has also shown that children who are obese start showing signs of atherosclerosis (hardening of an artery that leads to heart disease) as early as 11 years
of age and result in devastating outcomes like the death of Sanjay. These are extremely worrisome developments, and the Indian middle and upper-middle-class parents, who as per studies are the most affected, must wake up to these facts and take action to protect their children.
Today, the changing scenario in urban and semi-urban cities has taken a toll on the development of many children in their growing years. Usually, both the parents go out to work and the children are left alone with no proper guidance. Television, internet, and video games consume their time. Parents try to compensate for their absence and appease the guilt, by providing children with the latest gadgets and other luxury goods, thus increasing the communication gap and also pushing them towards obesity.
No child should die due to obesity!

·Parents, please play with your child! This will benefit the entire family and there will be no need to visit the gym for exercise.
· Parents, please eat meals as a family! Discuss the day’s events rather than sitting in front of the TV, or each member becoming busy with his/her own gadget.
· Parents, cook your own meals! Processed food and fast food both are tickets to weight gain.

Revert to cooking fresh food. Take time out for this activity and when both of you will do it
together it will be done faster, and as an added benefit help you to communicate better.
Let us save our children from the entirely preventable malady of obesity and its tragic complications, and give them healthy childhoods that will lead to productive and satisfying lives. 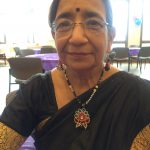 My name is Dr Nalini Tandon. I was born in Lucknow and grew up in Allahabad where I had my schooling. I passed my MBBS from Lady Harding College, Delhi University, in 1972. I worked with the Employees State Insurance Corporation at various places and posts. I retired in 2009 as State Medical Commissioner. After retirement, I volunteered my clinical services and taught at YMCA, New Delhi. I give great emphasis to education thus while pursuing a career I furthered my education by doing certificate courses in Family Welfare and Health Administration from the National Institute of Health and Family Welfare, New Delhi. I followed this up with a Masters Diploma in Health and Hospital Management from Indira Gandhi National Open University in New Delhi in 2002 for which I was awarded the University Gold Medal. I did not stop there. Later, I joined Masters in Public Health at Washington University in St. Louis, USA in 2013 and completed it in 2015. I followed this with a stint of jobs in USA.

I am now planning to pen down my experiences, as I love the written word. My hobbies are reading, listening to old Hindi songs and taking long peaceful walks.

Womenlines is a great initiative, it's been a pleasure working with Charu for Dream Catchers END_OF_DOCUMENT_TOKEN_TO_BE_REPLACED

Charu is a woman who is so passionate about what she does. She is so END_OF_DOCUMENT_TOKEN_TO_BE_REPLACED

“Life and Times of Unborn Kamla” A Book on Female Feticide causing Feminine Famine in India!