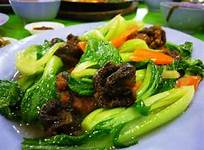 Chinese vegetarian cooking never attracted me until I tried it !

Singapore is a heaven for Chinese food and is considered to be a real heaven for gourmets. While I was working for some time I tried my hands on local Chinese vegetarian food during my lunchtime. I will not say that my taste buds were impressed but yes I found it light in comparison to our Indian food which is rich in nature. Finally, I decided to try my hands on it, to bring some variety in our daily food menu. I was surprised that efforts were not wasted and now my family has become a big fan of Chinese vegetarian food.

I started with vegetable soup in which I used lemongrass first time and it gave an amazing taste to the soup. Using only vegetables in the soup and adding little lemon juice to it made the juice lighter and it really acted as a starter. Otherwise previously when we had our regular Chinese soup full of sauces, it itself acted as a meal. For the main course, I experimented with mushroom, chestnuts, broccoli, Chye sim,  eggplant and baby corn. Mixed vegetables with the addition of light soya sauce and vinegar and topping it with red chilly flakes made it an awesome meal to be taken with rice or noodles. Mung Bean Sprouts is the other Chinese addition in vegetarian dishes.The crunchy texture and nutritional qualities of mung bean sprouts make them a popular addition to meals.

It’s not just about the taste. It’s important that Chinese vegetarian dishes display a harmonious balance of colors and textures as well as flavors.It is worth trying and highly recommended to those who look for healthy recipes with some experiments in taste!

Womenlines is a great initiative, it's been a pleasure working with Charu for Dream Catchers END_OF_DOCUMENT_TOKEN_TO_BE_REPLACED

Charu is a woman who is so passionate about what she does. She is so END_OF_DOCUMENT_TOKEN_TO_BE_REPLACED

10.5 Reasons Why You Should Write A Book

How to build the immunity against Coronavirus- Naturopath Ketki