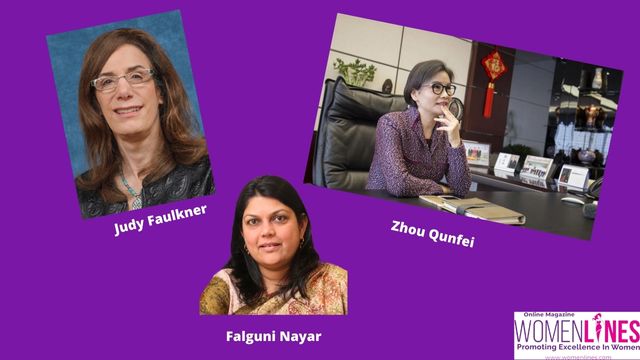 Are you aware that self-made richest women across the globe are less than 4% of the planet’s billionaires, as reported by Forbes?

The number is low but those who have their name on the list must have some exceptional qualities. What did they do to get there? How did they start? What were the key moments? They are able to take their dreams and turn them into reality through money management, opportunity spotting and exact planning.

There are so many different factors, from personality to social circles that go into why self-made wealthy women continue with their success. It’s rare, but it happens and these women have interesting habits that have helped them along the way. These women used their unique background and skill set to take advantage of opportunities they saw around them. They came from all walks of life, with varied educations, but all share one trait that helped them create their empire: entrepreneurial attitude. There are many inspiring, self-made women in the world who have managed to build a business of their own. That said, not all of the wealthiest people today started out with an easy path to this status. Sometimes, they’re entrepreneurs who worked tirelessly for years before finally seeing success. Other times, they’re female daredevils who risked everything to chase their dreams.

It’s no secret that self-made wealthy women are a rare breed. For many, their success comes from developing habits that help them reach their goals. What makes these habits different for these rich women? And what can we learn from them? What makes these women so successful and why? How do they view their success? However, there are some self-made women who have made a fortune for themselves through hard work and dedication. Learn about the habits and strategies these women used to get ahead of the game. The story of female billionaires worldwide is often a story of early investment and hard work. In recent years, the number of wealthy women has grown and they have become more visible in the business world. Many self-made women got their start by starting their own businesses at a young age. They took entrepreneurial risks early on and worked hard through challenges that threatened to end their careers. But what also helped them was some unique habits and personal traits that helped them succeed as entrepreneurs.

The entrepreneurial journey of these self-made women to join the mega-rich billionaire cannot be called an easy feat! Fueled by a creative spirit and innovative mindset to defy all odds, women have worked hard to build unique paths for themselves.

Japan, Germany, France, Canada, and S. Korea are the world’s largest economies without a single self-made woman billionaire,” Rupert Hoogewerf, Hurun’s chairman and chief researcher, said in the report. “The 124 known self-made women billionaires come from just 16 countries, meaning that 180-plus countries still do not have a single one. (Credit:www.barrons.com)

Read some interesting facts about these women who are billionaires-

Faulkner was born in 1943 and graduated with a bachelor’s degree in mathematics from Dickinson College and a master’s degree in computer science from the University of Wisconsin–Madison. Faulkner started Human Services Computing, which later became Epic Systems, shortly after receiving her master’s degree. Judy Faulkner is the hands-on programmer who pioneered the concept of patient-centric digital medical records in the US. In a Wisconsin basement in 1979, Faulkner launched Epic Systems with “one-and-a-half employees”. Today, the company resides on a 1,100-acre countryside campus and employs nearly 10,000 people. The company has never raised venture capital or made an acquisition, and develops all its software in-house.

Faulkner taught herself the basics of coding in just one week during her undergraduate years — and went on to become a computer science professor. It was during that time, in the mid-1970s, that she had the stroke of inspiration that would lead to the founding of Epic Systems. Distracted and daydreaming, she was suddenly hit by an idea about Epic Systems.(Credit www.cfi.co)

Zhou Qunfei is a Chinese entrepreneur who founded the major touchscreen maker Lens Technology. After the public listing of her company on the Shenzhen ChiNext market in March 2015, her net worth reached US$10 billion, making her the richest woman in China. Zhou, the 48-year-old CEO of Lens Technology, has built an empire manufacturing glass for tech giants such as Tesla, Apple and Samsung, but it hasn’t been an easy ride to the top. A migrant factory worker as a teenager, Zhou has gone on to become one of the world’s richest self-made women. In 1986, at age 16, Zhou dropped out of high school to work as an assembly worker in a watch lens factory. She took accounting classes at night and dreamed of starting her own business.

By 1993, she’d saved 20,000 HK dollars (or about $2,500) to set up her first company — a family watch lens workshop. She and her seven cousins and siblings worked and lived together in a three-bedroom apartment for four years. (credit: www.cnbc.com)

A decade after she quit her job to start Nykaa, Falguni Nayar debuted on the Forbes India Rich List 2022 at rank 44. Nayar, 59, has a net worth of $4.08 billion. She is one of the nine women billionaires on this year’s list.

Falguni Nayar quit her job as an investment banker in 2012 to start Nykaa, an online e-commerce platform for beauty and personal care products. The company opened its initial public offering (IPO) on October 28, 2021. Nayar, who owned a 53.5% stake in the company, became India’s wealthiest self-made female billionaire on a listing day.(credit www.moneycontrol.com). However, Falguni had a “self-imposed deadline” that she has to give entrepreneurship a try by the time she is 50. And thus Nykaa was born in 2012 as Falguni exited from Kotak. At that time, her children (twin Anchit and Adwaita) left to study in the US and she had the time she needed to focus on her entrepreneurship project.

Subscribe to an online magazine for women at www.womenlines.com to become the best version of yourself! Womenlines is a weekly online magazine publishing content on business excellence, health, and leadership Skills and is listed in the top 60 women’s online magazines to follow in 2022!