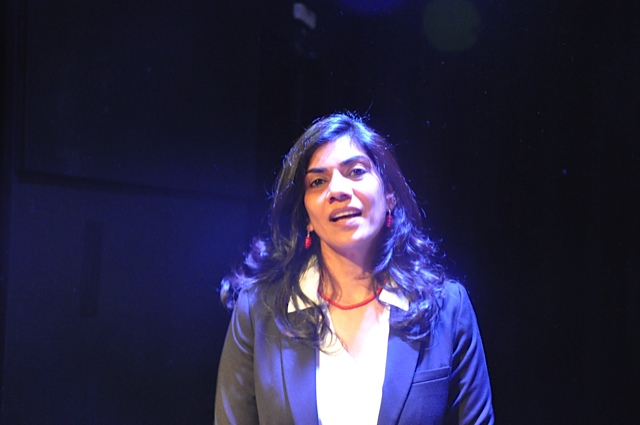 1. Please share with our readers little bit about yourself ?

I started working in television in my mid 20’s. I wrote and assistant directed for a popular travel show called Namaste India, on Zee TV. I then moved on to Associate Producing another travel show called Indian Holiday on Sony TV. I also did a few corporate films before moving on to Associate producing an indie film, “SNIP!” directed by Sunhil Sippy. It gave me the opportunity to work with industry stalwarts like Ravi K Chandran and oscar winner, Resul Pookutty. After that, I did a 2 year stint producing ad films, with Phat Phish Productions. After my move to Singapore, I took a break. I restarted my media career in theatre, with a play I wrote and directed, called MAGIC FOR MAYA. After that, I started Playacting Productions and since then, I have directed 9 other plays, 5 short films and 1 full length feature film. I also direct ad films. I’m also the recipient of the 2012 Mira Nair award for rising female film maker at the Harlem International Film festival.

The passion for theatre started 4 years ago but the need to tell a story has been with me for years! I enjoy the many mediums of conveying a message or telling a story. Film is a different animal, as is theatre. And they’re all enjoyable. I wouldn’t say I took a plunge. I’d say I’m enjoying swimming happily in this sea of creativity.

3. Can you share with us some of the challenges you faced during your initial days?

When I first started work in television, I knew the medium as something I had studied but never dabbled in. So yes, it did feel rather challenging. It was the same with producing. And ditto for directing. Every project brings with it challenges and I think the adrenaline is what makes all of this so enjoyable! I wouldn’t, therefore, restrict challenges to only the early days. It’s ongoing.

4. So how do you balance your personal and professional life?

Running a company means having to sacrifice social and family time. I hardly have a social life to write home about. I do try and make weekends and the weekday 7:30 pm to 9:30 pm time sacrosanct. That’s family time. With my husband. And my daughter who’s in Grade 6 and needs my attention and time. Before 7:30 pm, I belong to Playacting Productions.

5. What would you suggest to other aspiring women who want to venture out on their own?

I know a lot of women who have brilliant ideas. My suggestion: Just do what your heart’s telling you to do. Don’t wait for the money or the time. If you have the inclination, it’ll all come to you. And the path is full of hard work. Which is in itself, quite fun!

6. Is there any person who has mentored/supported/inspired you?

I have a lot of support in terms of family and friends. My husband, Mihir and my daughter, Rhea, are massive supports. My colleagues, Sarah Bloor and Shagun Chand allow me all my idiosyncrasies at work. And that is massive support! I am hugely inspired by J K Rowling. The more I see her films, the more I realize just how supremely clever she is!

7. What do you have in the pipeline for your venture’s  future development?

We have opened the second branch of Playacting Productions at Parkway Centre. It’s going to be a huge challenge to grow it. But we’ve done it before and so we’ll do it again. And of course the 2nd film.