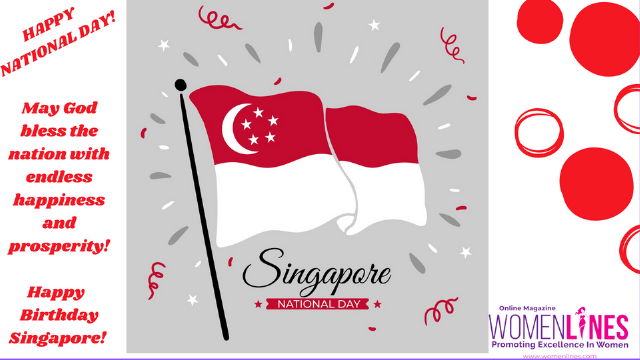 Happy Birthday, Singapore! May God bless Singapore with an abundance of prosperity, peace and success!

What Makes Singapore so Unique?

Singapore is quite famous for having some of the cleanest roads in the world. This is due to a 50,000-strong cleaning workforce employed to keep the streets neat. Singapore is also famous for its strict laws on littering, spitting on the streets, vandalism and public urination. If people are guilty of conducting such offence that can result in heavy fines and/or a punishment called Corrective Work Order, where offenders are required to pick up litter in public wearing a bright vest.

Singapore is quite known for its fitness. Tourist t-shirts often call Singapore a ‘fine city’ . This has happened because of a number of laws and regulations that can result in a very heavy fine if flouted, these can range from smoking in no-smoking areas, jaywalking or even eating and drinking on the MRT. More serious infractions like robbery, vandalism or drug trafficking in Singapore can result in jail sentences, but also corporal punishment like caning or even a death sentence.

If there is one Singaporean who people around the world can name, chances are that it is Singapore’s first prime minister Lee Kuan Yew. Often regarded as the founding father of independent Singapore, Lee Kuan Yew was known for his frankness and hard edge and was the driving force behind instituting some of the famous things Singapore is known for listed in this article, like the garden city and strict laws. His passing in 2015 was a day of national mourning for the country, and his son Lee Hsien Loong is currently Singapore’s third prime minister.

Singapore’s Night Safari provides a nocturnal experience like no other in the city; it’s also the world’s very first night zoo. Opened in 1994, the 35-hectare park features over 1,000 animals in their naturalistic night-time environments. You can Hop onto the 40-minute tram ride for an overview of the park’s main attractions. Be sure to amble along the four interlinked walking trails within the park, for a zoo trip like no other.

Happy Birthday, Singapore! May God bless with more uniqueness and more happiness to all residents of the country!

Subscribe to https://www.womenlines.com to become the best version of yourself! Womenlines is a weekly online magazine publishing content on Business Excellence, Health, Leadership Skills and listed in the top 50 women’s online magazines to follow in 2021!