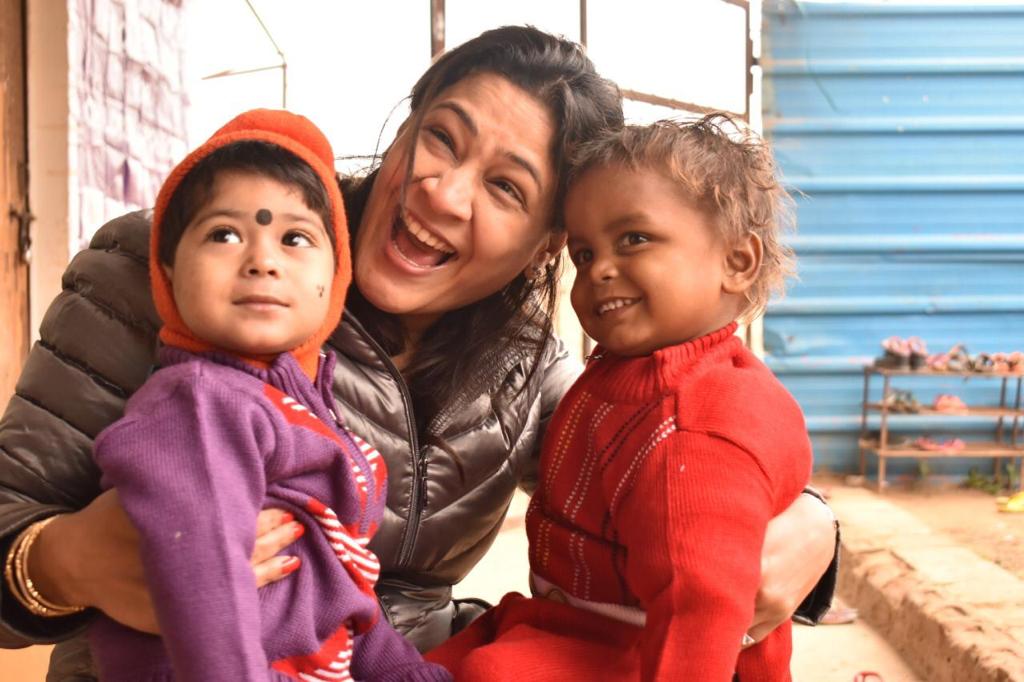 Womenlines takes pleasure to share about Geetanjali Chopra, Founder of Delhi based NGO, Wishes and Blessings! Wishes and Blessings is a unique platform for helping the underprivileged through its dedicated resources, including orphanages, old age homes and shelters for the homeless. Besides, the organisation is quite instrumental and proficient in linking beneficiaries with donors and minimising the gap between the blessed and the unfortunate.

“Didi, mera birthday kab aata hai?” (Didi, when is my birthday?). This seemingly innocent question sent shockwaves into a young Geetanjali Chopra, changed her life forever, and sowed the seeds for what was later to become her life’s mission- to spread happiness to the underprivileged, and fulfil the wishes of the lesser blessed.

Geetanjali Chopra was born into a large Punjabi family made up of lawyers, accountants and academicians. Brought up in Delhi, she did her schooling from Convent of Jesus and Mary, New Delhi. She received her Bachelors from Lady Shri Ram College, and her Masters, M.Phil. and Ph.D. from Jawaharlal Nehru College, New Delhi. She went on to study a few courses on International Law from the Hague and Utrecht University in Netherlands.

While she received quality education from well reputed institutes that formed a solid foundation to understand International Policy and Humans Rights, at home she received an education that she credits to moulding her into the person she is today. When facing an obstacle, she refers to the values and ethics that have been embedded in her as a young child, especially by her grandparents. They always shared what they had with the lesser privileged, and stressed on the importance of community service. As part of their efforts to give back to society, they would celebrate all special occasions and events with visually impaired children.

At one such event, Geetanjali was asked that very life changing question. At that time Geetanjali was just 9 years old, and could not fathom how no one knew when their birthday was… how someone never knew the joy that came with cutting a birthday cake and opening birthday presents. While at that young age she did not know how she would do it, Geetanjali decided that she would do all that she could to erase the differences between people, and to ensure that happiness would no longer be considered a luxury.

After completing her education, Geetanjali went on to try her hand at a variety of careers including teaching, journalism, research, paper handicrafts and even acting. However, she still couldn’t find the gratifying ‘job satisfaction’ that everyone seemed to have found; it eluded her. Even though these jobs gave her opportunities to interact with policy makers, bureaucrats and internationally renowned personalities, she felt that something was missing. It would be only later on that she would find the missing piece to life’s puzzle.

It was in 2014 that Geetanjali had her ‘aha’ moment. At that point in time she was working as a Fellow at the Centre for Policy Research, a Delhi-based think tank. She continued the practice of celebrating occasions with visually impaired children, just as her grandparents did. She followed the traditions they had set too; she would always ask them if they wanted anything, and did so on this day as well. One of the children immediately said- We want to play Holi! This left Geetanjali shocked, as she could not put together the very visual festival of Holi with children who could barely even see! However, she promised to help them, and she followed through. This Holi was the turning point in her life. By fulfilling the wishes of these children, she found the contentment she had been looking for. She now knew what she wanted to do, and immediately set out to do it.

At the peak of her career, Geetanjali set out to establish an NGO of her own, one that would seek to fulfil all of the wishes of the underprivileged and act as a platform where people could share their blessings with those less fortunate. This driving philosophy led her to name it ‘Wishes and Blessings’. Established in 2014 itself, the organisation started out by catering to the requirements of the same visually impaired children and has grown ever since then.

As part of its promise to ‘never say no’ to anyone who needs help, the organisation does not restrict its operations to focus on one demographic, and executes projects to reach out to beneficiaries cutting across barriers of age, class, gender and community. The programmes are designed to meet the immediate as well as long term needs of the underprivileged and cover over 9 verticals including education, daily meals, care for elders, Covid relief, SOS relief, winter relief, infrastructure, health and nutrition, as well as happiness. The youngest beneficiary is just a few months old, and the oldest, 90+, is a resident of their old age home. The team believes in working with complete transparency, and hold themselves accountable to all stakeholders- donors, beneficiaries and partner organisations. Thus, they execute due diligence before extending aid to those who come to the organisation for support.

At present, Geetanjali works as the Founder and President of Wishes and Blessings and oversees the entire functioning of her organisation. With 20 centres across Delhi/NCR and a presence in 7 states across India, the organisation has reached out to over 2 lakh needy and underprivileged people over the last 6 years. With her team of dedicated changemakers and a supportive family of donors and well-wishers, Geetanjali hopes to reach out to many more people in need of aid and help create bright, stable and fulfilling futures for all. She may no longer have a well-cushioned job that comes with several perks, but she feels that the happiness and contentment she experiences when she helps transform tears into smiles is incomparable and priceless.

Are you looking out for physical health, leadership skills, mindset health and image branding strengthening tools to be the best version of yourself? Subscribe to weekly free powerful updates of an online magazine Womenlines for free. Click https:/?www.womenlines.com!