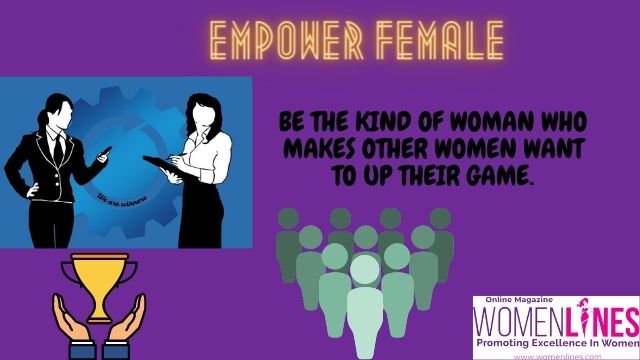 Your one effort can change the life of many. Empower Female leaders and make yourself stand out from the crowd.

“We need women at all levels, including the top, to change the dynamic, reshape the conversation, to make sure women’s voices are heard and heeded, not overlooked and ignored”
– Sheryl Sandberg

Have you ever wondered about your surroundings without a woman?

You are at home and you are surrounded either by your mother, grandmother, sister, daughter, or wife. As you step out from your house you are still surrounded by women’s whether it is school, college, or office, or any XYZ…place.

More the number of empowered female leaders established in our society, more opportunities arise for women in our surroundings. Because that would be an indication of women’s growth in our society. Yes, this is the core reality, which shouldn’t get ignored. Women leaders act as the source for other women’s dreams to make them true.

The world is moving ahead with this thinking whose reflection can be visible as women are winning the ground in the labor market and occupying their own position, which was unimaginable a few years back.

Many times women’s efforts didn’t get much appreciation in every place either at home or at work. Also, they were not allowed to have any right on the property of their parents and sometimes partners too. Earlier, in some countries females were not even allowed to vote and choose their representative. They are also deprived of choosing their work or job.

Empowering a woman in society should be taken as an opportunity for the betterment of society, rather than just raising one gender in society.

Iceland is the country that sets a commendable example for this and so wonderfully it represents itself by remaining on the top of the list of Global Gender Gap Report for the last 12 years. Apart from this, our global leaders have also taken an initiative to create awareness about women empowerment by celebrating the 8th march of every year as International women’s day.

You all must have heard about our 17 Sustainable Development Goal (SDG), in which every country is working to achieve the goals set with mutual global understanding in some or another way by creating their own local targets. Amongst them, Goal 5 is about Gender Equality, which says “Achieve Equality And Empower All Women’s And Girls”

Effect of this goal has been seen in various countries, one amongst them is my country too. We can see a good amount of women’s participation in different platforms from the fundamental source that is from representing in Indian Parliament to going to school in a village, from achieving medals in Olympics to being successful Entrepreneur. You name it and you get at least one woman in the crowd, which makes the whole squat different from others.

My country India has achieved this by simply starting its work from the root level and then moving towards a higher level. It has worked on an issue like – sex ratio, mortality rate, girl child education, and launched various schemes for deprived women and girls. India has a long history of women in different fields as a representative of all.

So, let’s come up with new ideas and try to support our ladies. Your one small initiative can be a life-changing moment for uncountable ones around the world.