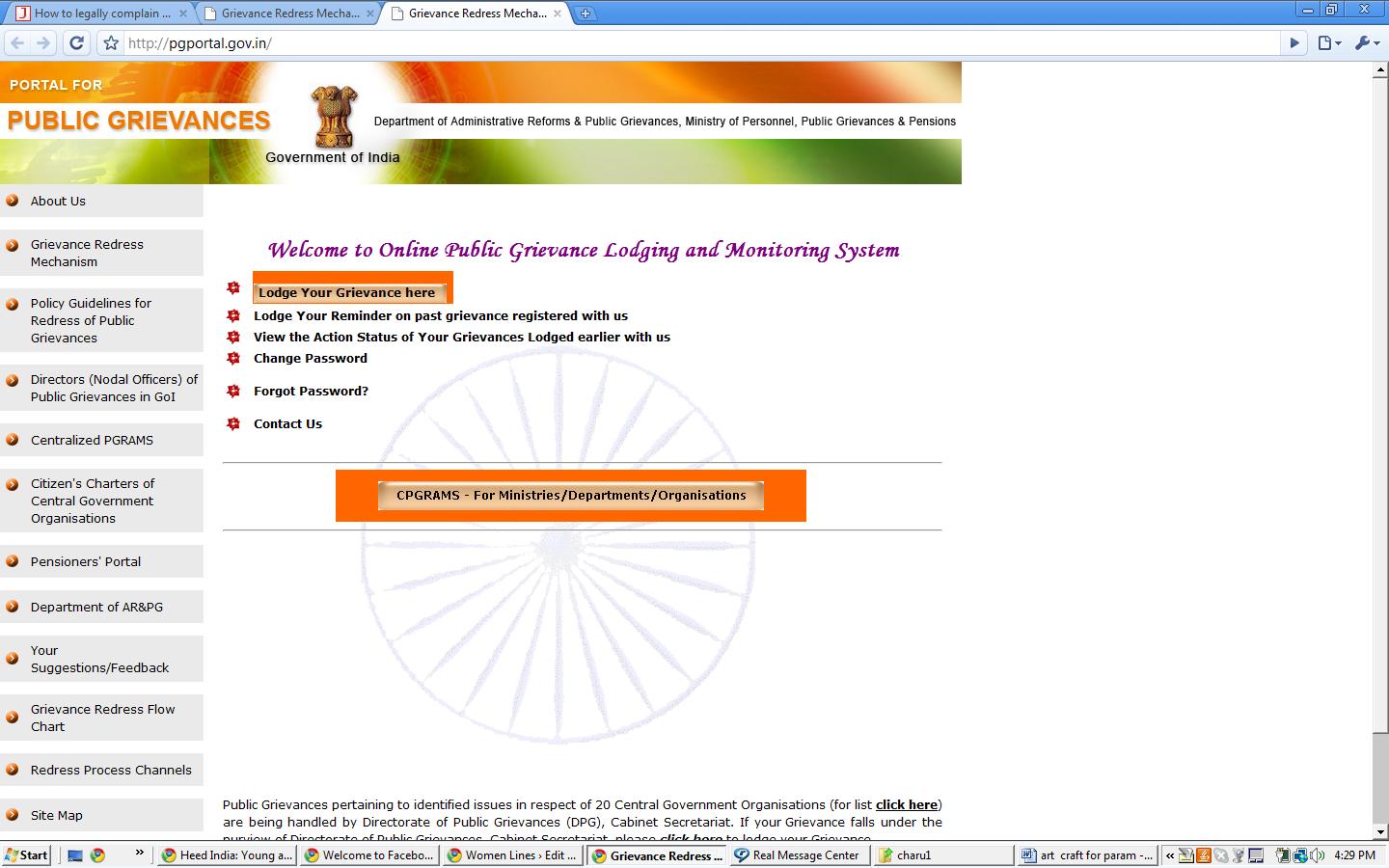 The government of India has developed an ‘Online Grievance Forum http://pgportal.gov.in/ . Any Indian can register on this website? Yes we are improving, maybe with slow pace but definitely we are changing for the better!

The govt wants people to use this tool to highlight the problems they faced while dealing with Government officials or departments like Passport Office, Electricity board, BSNL/MTNL, Railways etc.
Many of us say that these things don’t work in India. Its common scene in group discussions, whether its a family discussion, or friends one, in fact, the employee groups themselves discuss the laid-back nature of the Indian government. There are so many things to complain about but nobody to listen to those complaints. If somebody tries to reach the concerned authority for the grievance redress, he has to cross so many steps of formalities that in end his patience leaves him alone.

Grievance redress site will connect the common man straight to the concerned authority and thus will consume less time in decision making from the part of government  The challenge is to create awareness regarding the presence of this site. Indian government should promote this site in much larger scale.

The penetration of the internet among urban Indians stands at 9% now, assuming the total urban population at 336 million. The marketing  research http://www.marketingcharts.com/interactive/indias-internet-users-reach-30-million-637/

reflects that Internet usage in India is growing at the steady pace. But we can say that the population percentage who is using the Internet is having basic education and thus can be concerned about the government actions regarding some areas in their surroundings.

The need of the hour is to take that first step.

Indian womenfolk, what are you waiting for? You are not happy with the things happening around you. Damaged roads, a limited supply of electricity, corrupt officials, red-tapism, there are so many things which upset you as it affects the quality of your family life.

Take this liberty to question the government on various issues which are troubling you!
A couple of months back, the Faridabad Municipal Corporation laid new roads in his area and the residents were very happy about it. But 2 weeks later, BSNL dug up the newly laid roads to install new cables which annoyed all the residents. A resident used the above-listed grievance forum to highlight his concern. To his surprise, BSNL and Municipal Corporation of Faridabad was served a show cause notice and the guy received a copy of the notice in one week. The government has asked the MC and BSNL about the goof up as it’s clear that both the government departments were not in sync at all.

So use this grievance forum and educate others who don’t know about this facility. This way we can at least raise our concerns instead of just talking about the ‘System’ in India.
Invite your friends to contribute to many such happenings.