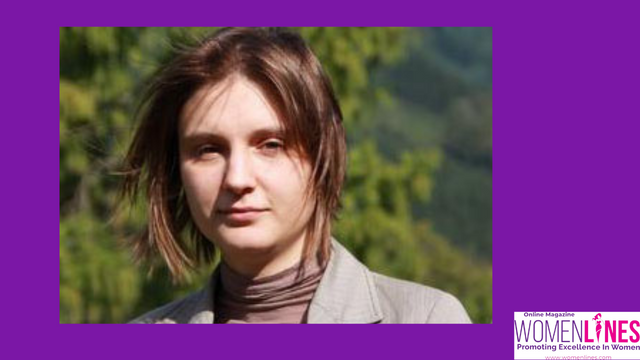 Womenlines team wants to congratulate Maryna Viazovska, winner of Fields Medala 2022, one of the highest honours in mathematics that is conventionally awarded to people aged under 40. Maryna is only the second woman to ever win the Fields Medal. The Fields Medal is often compared to the Nobel Prize.

Maryna Viazovska was born in Kiev, a city also known as Kyiv. She excelled at mathematics at school in Kiev so, in 1998, she entered the Kiev Natural Science Lyceum no. 145. This Lyceum in the Pechersk district of Kiev was founded in 1962 as specialised mathematics, physics, and computer science school. It is highly selective and only the most outstanding pupils are admitted. The programmes in mathematics and physics were developed for the Lyceum in cooperation with the faculty of the Kiev National University. At this school, Viazovska was influenced, in particular, by Andrii Knyazyuk (1960-2013).

In 2007 Viazovska graduated with a Master’s Degree from Kaiserslautern and in May 2010, she defended her Candidate thesis at the Institute of Mathematics of the National Academy of Sciences of Ukraine on the topic “Inequalities for polynomials and rational functions and quadrature formulas in the sphere”.

After a time as a postdoctoral researcher at the Institut des Hautes Études Scientifiques in France, Viazovska moved to Berlin in 2014 where she was a postdoctoral researcher at the Berlin Mathematical School and the Humboldt University of Berlin. In the spring of 2016, she announced she had made an amazing mathematical breakthrough by solving a long-standing packing problem.

3) In January 2018 she was promoted to full professor at the École Polytechnique Fédérale de Lausanne and later that year she received the 2018 New Horizons in Mathematics Prize.

4) Late in 2018, it was announced that she would receive the 2019 Ruth Lyttle Satter Prize in Mathematics

5) She was an invited speaker at the 2018 International Congress of Mathematicians. For 2019 she was awarded the Ruth Lyttle Satter Prize in Mathematics and the Fermat Prize. She is one of the 2020 winners of the EMS Prize. In 2020, she also received the National Latsis Prize awarded by the Latsis Foundation.

As for work, currently Maryna Viazovska is a professor of the Department of Number Theory of the Institute of Mathematics at the Federal Polytechnic School of Lausanne, Switzerland.

(Inputs in the article are taken from https://mathshistory.st-andrews.ac.uk/Biographies/Viazovska/)

Are you looking out for physical health, leadership skills, mindset health, and image branding strengthening tools to be the best version of yourself? Subscribe to weekly free powerful updates of an online magazine for women-Womenlines!