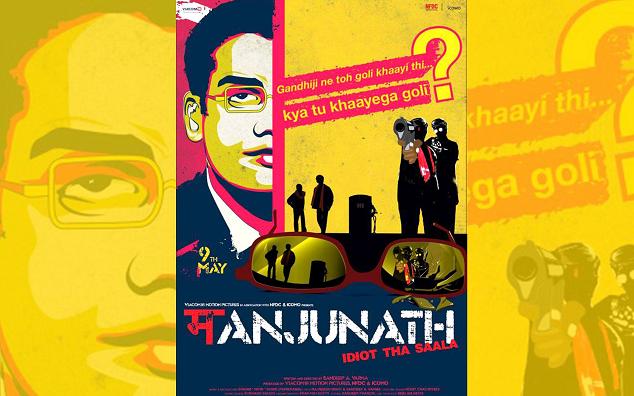 Manjunath is extremely sincere, soul-stirring and very real life story about how IIM graduate Manjunath was murdered for sealing a corrupt petrol station in Lakhimpur Kheri, UP.Hats off to Manjunath’s courage to fight with corruption.

The movie describes the pain and anguish of Manjunath who wanted to do his job sincerely despite facing all odds. He was honest, hardworking, sincere and passionate about his job. Negative elements of the society tried their best to scare him of his death beforehand but ultimately were not able to digest his honesty and killed him brutally. Most impressive part of Manjunath story are the steps taken by IIM graduate Ms. Anjali , who was so stirred after going through stories in tv channels and newspapers that she decided to set up a trust to help parents of Manjunath to fight the legal case.

After   Manjunath’s  murder,  two  IIM  graduates  –  Anjali  Mulatti and Jaishankar – set up “The Manjunath Shanmugam Trust”, to secure justice for Manjunath by getting  his killers punished.Anjali Mullatti (an IIML alumnus, ten years senior to Manjunath) is just another intelligent professional doing her work who had that courage to take this big step of setting the trust.It is big deal for any professional for taking the trouble of traveling from Mysore to Lakhimpur Kheri every month to attend the sessions court proceedings.She never met Manju also. Here comes Anjali’s stirred soul who forced her to take this step and help Manjunath’s parents getting justice!

Anjali Mulatti (IIML class of ‘93) and her husband H. Jaishankar (IIMB class of ‘92) are the real-life heroes, who played a crucial part in ensuring justice was done in the case. This feisty couple is based in Mysore, where they run a financial-education firm. Their need for justice was so strong that they took up the case when no one was willing to fight the corrupt system. Their die-hard determination not only earned Anjali and Jaishanker respect, but the case soon turned into a national movement. Justice eventually prevailed.

As per quote from Anjali-taken from website sisat.com-But the fight was far from easy. “Frankly, Jai and I didn’t know the difference between an FIR and a charge sheet before taking-up Manju’s case. And because we fought for an honest cause, we got tremendous support from the police and lawyers, who don’t exactly enjoy the best of reputations in our society. So, unless we experience and understand the reality nothing changes. If you believe in a cause, fight for it, you don’t have to fast unto death, just follow your convictions,”

Hats off to  Sandeep Verma, FMS ’93 and CEO of Icomo Advertising, scripted, who raised funds and directed & produced Manjunath.

Women Lines congratulates and wishes good luck to Ms. Anjali and Mr. Sandeep for their respective roles in bringing a story of Manjunath to the whole world!