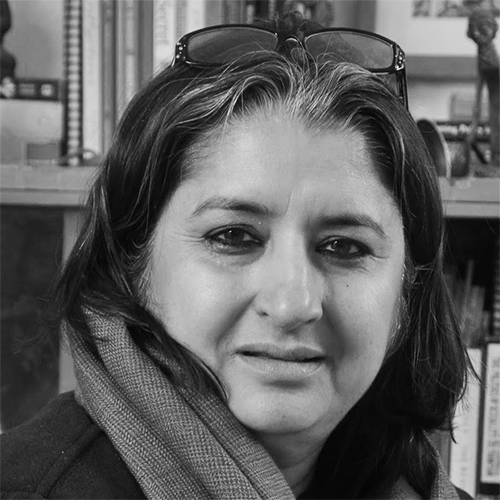 Womenlines takes pleasure to share an inspirational journey of Smita Bharti, President of Sakshi-a rights-based NGO! If you are facing challenges in life, get a big dose of motivation from Smita Bharti who has proved that there is so much to do in life and that too for others who are vulnerable and need help-

Our stories don’t always start at birth. Similarly, Smita’s story began one fine morning when she walked out of her abusive marriage holding the hands of her two children with no plan in mind, into nothingness.

In the society we live in, girls are always taught that marriage is the ultimate goal of their lives. That day in 1995 when Smita walked out of her marriage she broke this social construct that has been forced down women’s throats. That’s when her story of self-discovery and acceptance began. But even after everything she has survived, when you ask her if she would choose a different life for herself, she would stop and tell you that she has pondered about this many times and has finally realized that she wouldn’t have chosen a different life but if she had the experiences and knowledge that she has now she would have definitely done things differently. Her experiences and all the turning points of her life have transformed her into the person she is today and finally, at the age of 55, Smita has grown to love who she is.

Smita Bharti, recipient of Karmaveer Puraskar for Social Change, a Rotary World Peace Fellow, a Special Fellow WISCOMP, Senior Fellow Literature, KK Birla Foundation, is the Executive Director and President of Sakshi, a rights-based NGO. She is also a co-founder of Hungry Heart Festival, a theatre society focused on theatre for social change. She started working with Sakshi almost two decades ago as a theatre practitioner, preparing a performance with women who had survived third-degree domestic violence. And now she is directing the vision, charting the mission, crafting the action, building on the legacy that is Sakshi, today. Sakshi is a capacity-building organization established in 1992. Being a pioneer in working against Sexual Harassment and Child Sexual Abuse in India, Sakshi is now focused on The Rakshin Project, envisioning a world free of child sexual abuse.

Survivors of violence, often understand the need to create an environment where people are cherished and celebrated. And Smita has turned that dream into a reality by sharing that dream with numerous others. She believes in people, nudges them towards excellence and then watches them emerge successful with total confidence in them.

With a career spanning over three decades in Theatre and Social Art Interventions for Behavior change. Through research, training, workshops, performances, campaigns, and publications, Smita works extensively and intensively with women and adolescents in difficult and challenging circumstances, in prisons with victims under trial, with survivors in situations of domestic violence, sexual abuse, and physically and mentally challenged individuals. She has substantial experience as a senior facilitator for workshops/training/capacity building with groups across social strata ranging from the judiciary to under trials, corporate to grass-root communities. She has a strong network in many fields and skills that contribute to the analytical evaluation of options and strategic action for sustainable impact.

As the Executive Director of Sakshi, she is focused on spearheading a youth-led movement to create a social tipping point to Stop Child Sexual Abuse. Whereas on a personal level, she makes skilful use of a range of media, including film, theatre, visual art, oral narratives, and literature to create and deliver immersive experiential learning programs. These sessions are interactive and participative and require the participants to engage with the module using interactive and creative tools. Her quest is to explore the structural hierarchies and taboos, traumas, and wounded psyches within people, and draw workshop participants into a journey of co-exploration. She works with the aim to facilitate students to ask questions so that they can go on to re-define `safety’ and `security’ for themselves. This will aid them in breaking out of vicious circles of fear and choicelessness, and actively seek to transform their lives.

She thrives on the transformative and restorative justice that she has imbibed for herself, and looks to create the same for others through her work. She is driven towards keeping children safe from sexual abuse. Educating youth to take charge, helping them become accountable and practice their right to Equality which helps them create and energize preventive mechanisms to keep children and themselves safe from sexual abuse. It is an activity that carries the potential of stigma. But she is willing to take the risk of being branded in whichever language the society chooses to brand her. Today her brand is Equality. She will not let the sense of shame, helplessness, hesitation, and fear, damage the right to equality of the 50 per cent of children in this country. She will not stop till a single child is clutching thin air trying to understand the sexual abuse s/he is being subjected to. She has willed to practice her right to equality. Everyday!

Subscribe https://www.womenlines.com to become the best version of self! Womenlines is a weekly online magazine publishing content on Business Excellence, Health, Leadership Skills and listed in top 40 women’s online magazines to follow in 2020!