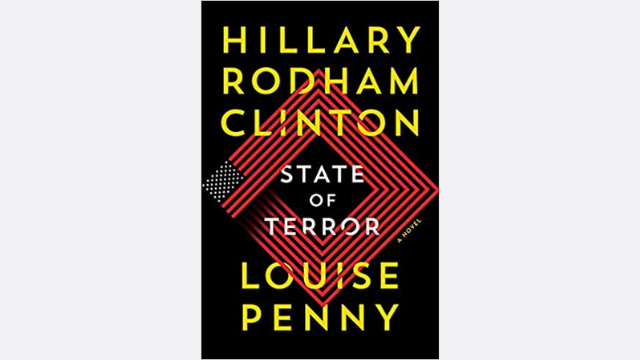 Yes, it is true! Louise Penny and Hillary Clinton teamed up to write the new geopolitical thriller “State of Terror.”

Place your order at Amazon Now!

Clinton has written several nonfiction bestseller books on her own over the last many years, like Hard Choices, It takes a village, What Happened etc. It is amazingly inspirational to see she tapped into her creative side this time. Last week she tweeted that book was “a labour of love.”The plot in “State of Terror” is ambitious and apocalyptic. Nothing less than the future of the world is at stake. As the novel begins, Ellen Adams, the former proprietor of an international media empire, has been improbably appointed U.S. secretary of state by Douglas Williams, the condescending president whose candidacy she had opposed. Exhausted and dishevelled after flying back overnight from a disastrous trip to South Korea, she arrives late for Williams’s State of the Union address.

Hillary Clinton is a true leader in a real sense. She is an inspiration to many girls who has proved that nothing can stop you from achieving your vision. Hillary Clinton’s work profile as shared on her website reflects that she has been always a woman of substance, working towards making the world a better place!

Hillary Rodham Clinton has served as secretary of state, senator from New York, the first lady of the United States, the first lady of Arkansas, a practising lawyer and law professor, activist, and volunteer—but the first thing her friends and family will tell you is that she’s never forgotten where she came from or who she’s been fighting for.

Hillary grew up in a middle-class home in Park Ridge, a suburb of Chicago. Her dad, Hugh, was a World War II Navy veteran and a small-business owner who designed, printed, and sold drapes. Hugh was a rock-ribbed Republican, a pay-as-you-go kind of guy who worked hard and wasted nothing. Hillary helped with the family business whenever she could.

After graduating high school, Hillary attended Wellesley College, where she became more involved with social justice activism. By the time she graduated, Hillary had become a prominent student leader—she was elected by her peers to be the first-ever student speaker at Wellesley’s commencement ceremony.

After college, Hillary enrolled in Yale Law School, where she was one of just 27 women in her graduating class. After law school, Hillary didn’t join a big law firm in Washington or New York. Instead, she went to work for the Children’s Defense Fund, going door-to-door in New Bedford, Massachusetts, gathering stories about the lack of schooling for children with disabilities. These testimonials contributed to the passage of historic legislation that required the state to provide quality education for students with disabilities. This commitment to public service and fighting for others—especially children and families—has stayed with her throughout her life. Exceptional work done by Hillary can be listed as-

Are you looking out for physical health, leadership skills, mindset health and image branding strengthening tools to be the best version of yourself? Subscribe to weekly free powerful updates of an online magazine Womenlines for free. Buy some interesting products for women from the Best Sellers page of Womenlines!