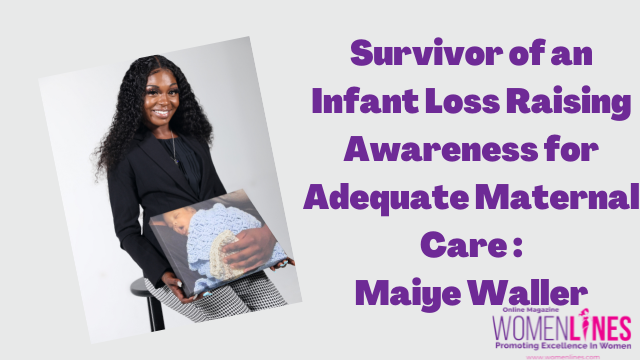 Womenlines guest contributor Maiye Waller from North Carolina, United States, is sharing her empowering story of being a survivor of infant loss who is on a unique mission to give a voice to women and babies in her community by making sure they receive the most adequate maternal care and support during and after pregnancy.

I moved from my hometown of St. Petersburg, Florida to Greensboro, NC in November of 2016. I previously carried a long-distance relationship with the then “Love of My Life” Dave. After just a couple of months here, I was instantly gifted with the biggest blessing of all, my first baby! I was about to be a mother to a little boy I had named Mace. The whole pregnancy was the most beautiful experience ever! I felt like he brought me so much luck. We won contests and I even had two Baby Showers! This kid had it all. By God’s grace, I went on to carry him full term. To my surprise, my mom flew in on the morning before my due date. I can say that September 19th,2017 is a day I remember unambiguously because it was the day before my life changed in the most irrevocable, unnatural way…

This is Mai Truth..

On 9/20/2017, I gave birth to my son Mace A. Williamson. The labour was long! 32 hours total! The most exhausting 32 hours that couldn’t have prepared me for the first few seconds of Mace’s life. “Code Teddy Bear”! I heard someone say. My mom caught a quick picture of Mace. He looked just like I had dreamed! But he wasn’t crying, His eyes were closed, and they were wheeling him off before I could even hold him. I was confused. They told me he had to be on some cooling blanket for 3 days. Still muddled, I didn’t think of it being a serious emergency because this was my first baby and I really didn’t know anything, seriously. Not even that “practice push” term the nurse used during the birth. So after not three, but SIX days in the NICU without a diagnosis; I had to leave the hospital. Away from him. Mace. They wanted me to leave my baby there alone. I was devastated. But God knew I couldn’t bear it. That same day, I got the news that I was blessed with a room at the Ronald McDonald House!

I was able to stay there while my son was in the NICU. I would have to be away from David most of the time though because he had to go back to work immediately. Mind you, he had taken only just a few days off after Mace’s birth. His boss understood but Dave knew that our finances were looking funny. He had to provide, so day in and day out, I was with my son Mace in the NICU. ALL-DAY. It was the most emotional experience ever. I had so much anxiety! I dealt with depression. I was pumping breastmilk, but it seemed like the less my baby was near me, the less milk my body produced. Or my body knew something that I didn’t want to believe…

On the seventh day of Mace’s life, he was given an MRI. It was determined that Mace had suffered brain death due to a birth injury caused by the vacuum-assisted delivery.  It was something I could have never prepared for. YOU DON’T PREPARE FOR IT! You can’t. The life I carried for 9 months, gone. The dreams and goals I had for me and my little family, gone. I was dead at that moment. I just wanted to be with Mace. I mean, what else could be to live if I wasn’t a mom to him?

I love and respect every staff member of the NICU that tended to my son as well as the one’s across the world. BUT I wish someone had been real and just told me from day one that he was gone. I asked! If I had known what I know today, four years ago, he never would’ve made it to the NICU. For 6 days I watched helplessly as my baby boy Mace was being poked and prodded, all useless. That’s probably the harshest reality of being a NICU mom/Loss Mom. Seeing my baby being given useless medication or tests ran that they knew were no good to him. I had to end this! He was just a vessel; his soul was gone!

Mace passed away in my arms without monitors on October 2nd, 2017. Now I Lay Me Down to Sleep, another nonprofit organization that partnered with the local hospital; did the final photographs for us to remember our Mace. Those two nonprofit agencies gave me a vision…

So, I fought for peace, closure, and the truth for four long years. I had to stand for something. He was a bundle of life and joy before I went in for the birth. He was let down and so was I. From that day I promised to dedicate my life to him because he was taken.

In his honour, this year, I created the nonprofit organization called The Mace Anthony Williamson Foundation. The mission of the Mace Anthony Williamson Foundation is to give a voice to women and babies in my community by making sure they receive the most adequate maternal care and support during and after pregnancy. I will provide doulas to new qualifying mothers free of charge as a way of extending strong support for them during and after pregnancy and/or perinatal loss. In time, I will fund a community support centre that promotes mental health, provide any kind of support needed for women and families who have dealt with fetal death or babies in the NICU for extended stays.

We have only just opened our doors in May 2021 but the response has been very overwhelming but much deserved. I was contacted by The Florida Dept of Health’s TOPWA (Targeted Outreach Pregnant Women Act) Program in Pinellas County, Florida, to bring me on board as a referral specialist, I am from St. Pete, so we knew without question it would be a huge impact in the community. I have even gotten some celebrity reach in just this short period of time; Gretchen Carlson is probably the most special and significant connection that I have made! She is on the Board for the March of Dimes. I have given this Foundation everything I have. I must walk by Faith. I must be that light. I know people are my passion and I also know that my pain turned into my purpose.

Since May the support has been amazing! I have had several nonprofit organizations reach out to collaborate with us for NICU Awareness month in September. I, in turn, reached out to some too. We all have a similar vision.  I am all for collaboration.  I recently launched a project called “The L.O.S.S. Group Project”. It stands for “Ladies Owning ‘our’ Stories of Survival. the L.O.S.S. Group Project is a Blog Group that is open to listening to ANY and ALL women sharing AND owning their unique “stories of survival”!  We all just want to be heard. I know you can probably relate to also always being the one to hold things in, always being the one that just accepts what has happened to them and blamed yourself for it and running away from the truth!

JOIN US on Facebook or shop in our store for your new favourite t-shirt!

I am very grateful to have been able to share my story with Womenlines Magazine and the World. I hope I left you with a little bit of Light today. Let’s be the Voice!

Are you looking out for physical health, leadership skills, business excellence tools to be the best version of yourself? Subscribe to weekly powerful updates of Womenlines for free. Click https://www.womenlines.com!